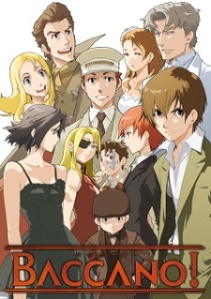 Baccano! is, overall, a pretty good “starter” anime for anyone looking to get into the medium. Provided that the audience is willing to go along for the ride despite not knowing where it’s going or how they got to this point for at least a couple of episodes, the storytelling style is one of the big selling points. Isaac and Miria are a stand-out comedy relief couple and the show uses them excellently. It’s way too easy for writers and showrunners, upon finding out that the audience likes characters like this, to run them into the ground. Baccano! avoids that mistake, and they’re always a treat to see when they do pop up in one storyline or another.